From 1882-1891 Russia designed the bolt-action, five-round, internal-magazine fed, Mosin Nagant military rifle. It is a well known long-gun, not just due to the fact that over 37 million were produced, but also because it is sought after by collectors and enthusiasts. It is very effective with its 7.62×54R round, and much like the AK-47 and its variants it is durable, easy to use, and inexpensive. However, not as inexpensive as back in the day when you could shell out a single $100 bill for one. Now-a-days you can get a Mosin at Cabela’s for around $250. Other places have them listed for more depending on the vintage and series. But, I digress, you didn’t come here for a history lesson, so lets press on.

In January of 2013 the New York SAFE Act, or as we NY residents like to call it – the UnSAFE Act became law in the middle of the night. Just prior to the Governor cramming this hideous law down our throats, a good friend of mine, Brennon,  purchased a case of six of these fine historical rifles. With no room in his safes a few of them shared some space with my family of long-guns. One eventually ended up going to his brother but I made sure that two were earmarked for me! A long time later after some greenbacks changed hands and bartering was done. Bartering in the form of painting his hunting lodge, him attending my Utah multi-state course, and then finally the guns, including the bayonets, were officially mine. With matching numbers on the bolt and receiver, I was excited to add the 1939 and 1940 Tula manufactured M91/30 rifles to my collection. 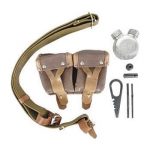 Originally I had the desire to turn one into a period sniper rifle with a PU scope and the other into a current day sniper rifle with an Archangel stock. Over the years, I picked up a couple items I was missing, for the 1940 rifle to be restored to period. I was able to fairly easily find a sling and cleaning kit at the local gun shows. However, an original PU scope proved to be impossible to find at the shows. So to the internet I went. To my amazement a search for these scopes showed that it cost almost as much if not more than the rifle itself! Even the reproductions were costly. So not wanting to spend that much on the scope plus the cost to mount it and have the bolt bent, I put the whole thing on the back burner for the time being.

In all of the years I had these relics in my possession, I had not taken them out to the range but a handful of times. However, after this project is complete they will surely see the light of day quite a bit more often. At least my new aged sporterized Mosin will. Recently, we used one of them to blow up some Tannerite, as you can see in the below video. It was a fun day at the range.

Just like that, the project was brought to the front burner, once again. While staffing the Laser Ammo booth at the I/ITSEC trade show in Orlando, Florida last month, my project got injected with a blast of energy. I met a guy, who knows a guy. Man that sounded cliché. Anyways, Keith Avery stopped by the booth and we got talking about guns, and he had to tell me about the Mosin build that he just finished. He was excited to share his story with me and I was so glad that he did! Keith’s enthusiasm and photo of his completed work of art, shown below, inspired me to revive my build and write about the process via this two-part article.

Keith referred me to Rock Solid Industries, who referred me to Coyote Creek Armory, who then referred me to Black Dove Customs. The collaboration, on this build, between the three companies has been a blessing and helped everything fall into place. After careful thought and input from Ken at Rock Solid, I decided not to turn the 1940 Mosin into something it was not. Though there were original Mosin Nagant sniper rifles built, the specific one that I have was not one of them. The original sniper rifles came with a bent bolt so not to interfere with the PU scope. It all came-down-to not wanting to cut the bolts off both of my Mosin’s. One of them yes, but both of them, well I just couldn’t do it! So I decided to simply restore the 1940 to its original glory and turn the 1939 into a current day sniper rifle.

Though it took me years to get to this stage, with the help of the many people and companies listed below, this project will be done in a matter of months. Once completed I will be taking a trip to my good friend, and Top Shot, Keith Gibson’s farm (check out his family business here) to do some long range shooting with my new sporterized Mosin Nagant sniper rifle.

To read the final steps of this journey, along with all the products and services each of the above people and companies played in this build; see pictures of both completed rifles, and watch a video of Keith and I putting the new sporterized rifle through its paces, make sure to join our newsletter and like our Facbook page. Watch for my follow-up article to this one titled “My Two Mosin Nagant Builds [Part 2 of 2]”. If you enjoyed this article please like it on Facebook and share it with others.