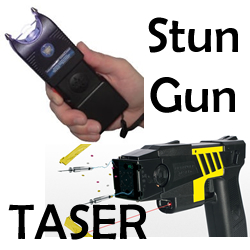 Back in March the U.S Supreme Court wiped out a Massachusetts court ruling that had upheld the conviction of a Massachusetts woman, arrested in 2011, for having a stun gun which she said was for protection against her former abusive boyfriend.

Many people confuse TASER and Stun Gun. Just to clear things up, let me bore you for a moment. TASER is a company that makes devices that fall under the category CEW (Conducted Energy Weapons) or CED (Conducted Energy Devices). Upon firing, a TASER shoots two metal probe darts at a distance of 15-35 feet. The TASER can also be used as a direct contact stun gun. Though, a stun gun is not a TASER, as it does not project any darts, and you must make contact with the assailant for the device to work. Either way, they both hurt like hell!

Now back to our topic. SCOTUS ruled that the Second Amendment applies “to all instruments that constitute bearable arms,” even those not in existence at the time of the founding. Though it came close to doing so, the ruling did not categorically declare bans on stun guns unconstitutional.

So what does this mean for New York State residents? Well first off the ruling sends the case back to Massachusetts for another round in court so it could mean nothing for NY. At this time NYS Law S 265.01 states that a person is guilty of criminal possession of a weapon in the fourth degree, a class A misdemeanor with up to a year in prison, when: (1) He or she possesses any firearm, electronic dart  gun, electronic stun gun…

This is the law that is still on the books! Just like in my article “How many rounds, 7 or 10?” A Judge or Court ruling does not change the law. Technically it is still law until the law is amended. Until then, my suggestion would be to take our course on pepper spray and carry that for a less-than-lethal option. Now don’t laugh too hard when you watch me get tased in the below video!